Where does the film critic in me cross over with the foodie persona I write as? In one of many cases, Big Night, directed by Campbell Scott and Stanley Tucci (in context, the latter played Julia Childs’ husband in 2009’s Julie & Julia, another foodie picture) and released in 1996. It’s a delightful comedy, nimble and charming not far off from something in more recent memory like Ratatouille. Like the very best restaurants, watch and engage in the film for the food and fun, but you really stay for the environment created by Scott, Tucci, and co-writer Joseph Tropiano. 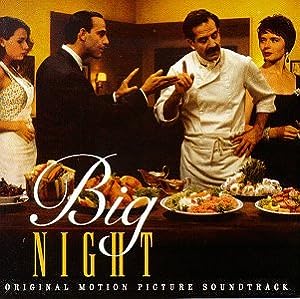 The film follows a pair of Italian brothers (Tucci and Tony Shalhoub of Monk fame) who have migrated from Italy to New Jersey with aspirations to bring their familial love of cooking and food to New Jersey. Secondo (Tucci) runs the business side of things, getting customers and ensuring the best service possible with his smooth-talking, while the shyer Primo (Shalhoub) runs the kitchen. Right off the bat, the dynamic is perfect and yet familiar to watch  unfold between these two characters.

However, their restaurant “Paradise” is facing financial pressures, and even the grandiose competitor restaurant owner Pascal (Ian Holm) is barely able to help them. It is then that the heat is turned on, so to speak, when Pascal promises to persuade Louis Prima to attend “Paradise” for one evening, creating a buildup of professional and personal stresses between the brothers.

Finite complications arise, too, as slick Secondo is dating the kind-hearted Phyllis (Minnie Driver) while having an affair with Pascal’s wife (Isabella Rossellini). Primo’s affair lies exclusively in his work, as he pours his joy and care and everything that makes him a good man into his dishes, to the point where his relationships with out people are drained out. These actions bubble up to the “big night” of the celebrity’s guest appearance, which may safe or dispose of their business and their dreams. Scott and Tucci play with the Italian-American stereotypes in just the right ways; making the comedy lively and still somehow realistic. The script remains the most genius aspect of the film, as the rising of the action to the “big night” cuts deeper into the layers of commitments to family and friends. Both brothers, granted with their flaws and inabilities in the American business model, are forced to overcome surprising obstacles because, at the film’s core, they share a love for their restaurant and their heritage.

Big Night is an absolutely magical film from start to finish. Playing on Netflix as we speak, it’s not one to miss, both from a foodie and film-going perspective!

The two great loves of my life are the movies and food; you can't take those away from me. Growing up in Oregon, where the hammering rain can't help but lead you inside great restaurants and venues, I've picked up a fine appreciation for these pieces of beauty and art, and how to give and get those along life's way. Through a life of pictures and dishes, my only wish is to be able to share with any and all my insights, misadventures, and fortunes.